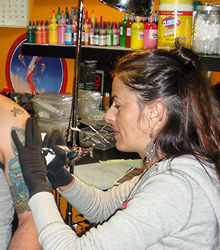 Born in Milan (Italy), Andreana grew up with a passion for art and creativity. She studied graphic arts and decided to bring her skills to life by learning the artistry of tattooing, which she has been doing since 1992. In 1997 her love of tattoos and travel brought her briefly to live and work in different locations in Italy, Madrid (Spain) and then Puerto Rico, where she enhanced her abilities at the first and oldest tattoo shop on the island, “El Indio” in old San Juan.

After about a year in Puerto Rico, Andreana moved to New York where she worked at Studio Enigma, followed by a three-year partnership in another shop.

In 2004, she opened SUPERNOVA TATTOO and couldn’t be happier. At her shop, located in the heart of Astoria, Queens, she does what she enjoys most – meeting new people and learning about them and their visions. She likes to develop a good relationship with the customer, listens and shares her own ideas, taking her time. Trying to satisfy every customer’s needs, so far with success.

Portraits, black/grey and photo-realistic peak her interest, but she likes the challenge of keeping her work varied.

She speaks English, Italian, and Spanish.